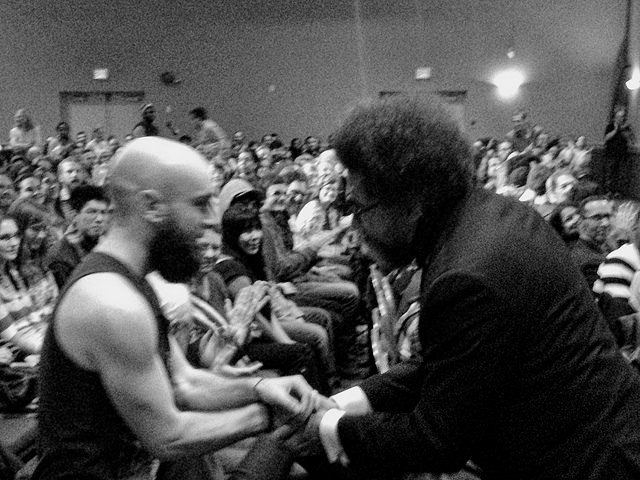 I was certainly curious last week to attend the Cornel West talk that is part of the TRU Student’s Commons Voices series, not knowing quite what to expect. I have only a weak association of West with his music and the long ago now infamous Obama Beer Summit following West’s police confrontations.

But everything was clear from West’s opening line, gripping the edge of the podium, and reminding the audience of our short time in this space “from Womb to Tomb.”

Forgetting most of the power words he shared, what lingers is that… it feels so rare for a talk to be that a talk. And a powerful one. West used no notes, no computer slides. Just the force of his preacher like evocations, the intensity, and emotion of a human voice.

One might guess that you can find on YouTube much of what he said in other talks he gives at educational institutions, like his talk at University of Washington Bothell:

But when you listen, even if he is using phrases, sentences, stories he has said before, he is doing as the musicians- Coltrane, Armstrong, BB King, he cites (and reminded by the audience, to call out Canadian Oscar Peterson)- he is riffing from his collection of ideas, onto like a note for note replay, but pulling something out in the moment. It’s right there on his web site, “a blues mind in the life of the mind, a jazz man in the world of ideas” And his calls to us as educators, for a practice of “deep education”- again when he brings in the jazz metaphor, “I don’t think of the classroom, I think of John Coltrane” The photo at the top was one of those moments hard to forget. A young man at the microphone for the Q&A, asking first permission to address him as “Brother West”, thanking him for what was described as one of the most important life events being in the audience– everything stopped as West rushes out to give this man a big strong hug.

Maybe cliché maybe not, it was electric in the room. And if you feel the energy in the room when someone puts words into it like I did, it stands out.

West reminded us too of Socrates’ line: “An unexamined life is not worth living” — meaning to me many things. Unexamined might mean not being conscious or reflective of oneself. Or not even considering one’s impact on others. Or not looking critically ot one’s self, not to denigrate, but to improve.

To me it says that Socrates would have been an awesome You Show blogger.

I'm a dog on the internet. I like pretty themes.